Above: OBS! Lost in Video

Photographic documentary of OBS! Vårby with additional text by Håkan Nilsson is published in January 2019 issue 132 of HJÄRNSTORM.

I had been spending time in a variety of storage facilities that have been retrofitted into various buildings in Stockholm. City Self Storage seem to specialise in this as opposed to having custom facilities built in industrial parks. By chance then I stumbled into what appeared to be a rather interesting triangular shaped shed set just of the edge of the motorway which began life as OBS! Vårby COOPs first out of town super market built in 1963.  Since then it has been inhabited by MIO, who have now left, and is currently subdivided on the upper level housing Erikshjälpen a large second-hand store, a Lebanese restaurant, a DIY store and will soon host a LIDL. Below is a City Self Storage facility. The plan of OBS! was originally conceived as free-space under a modular triangular roof and has now been subdivided producing some odd configurations. The upper level was supported by a large basement and service system which has now been divided

up through the logic of modular private storage units. I haven’t looked at the COOP archives yet but there is a very simple description of the building here.

What interests me in addition to the reconfiguration and subdivision of the free-space is the sites ongoing relationship with the circulation of domestic consumer goods from a supermarket/megastore outlet to the present storage of surplus consumptive debris. This appears not only in City Self Storage but also in the second-hand store which has been configured in the fashion of an IKEA – a series of furnished rooms without walls.

From one of the archive photos available on Wikipedia  one can see that the large service ramps which lead to the underground system start in the customer carpark. This is peculiar in the sense that the public

space of the carpark and front of house to OBS! was part of the image of delivering and collecting goods.

In regard to the storage environment; while beautifully branded with a bold corporate colour choice; there is something slightly sinister about its material composition. A space of containment constructed out of off the shelf industrial systems and rhythmed with padlocks.

Access in and out of the storage facility is via a variety of automated folding and sliding security doors. When entering your personal access code, the system flashes your name and “Welcome” or “Goodbye” as well as informing you of special offers! A jolly language of semi-automated periphery. Once underneath its hard work not to get lost, which I did briefly, in video. 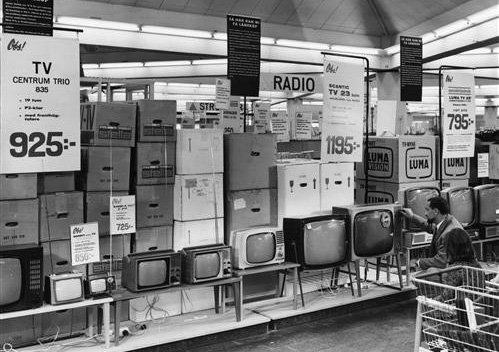